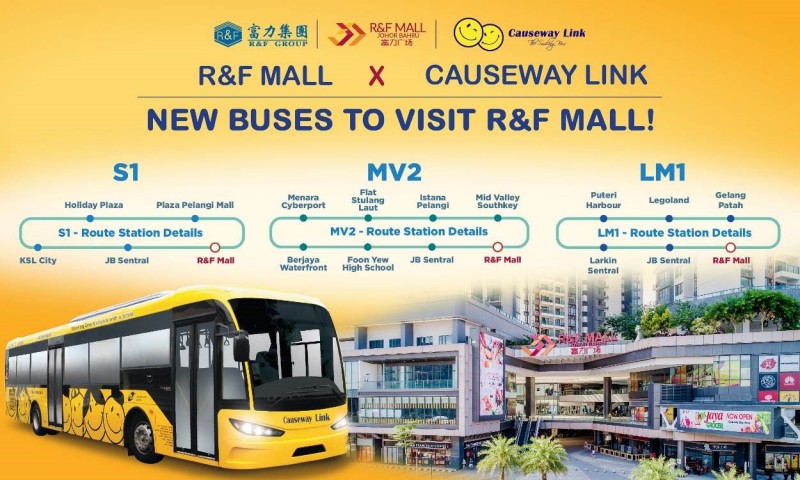 The official launch of all three routes is a joint-effort of both R&F Development and Handal Indah who truly support ‘Cuti-cuti Malaysia’ by adding more drop-off points on the routes, hence allowing Johoreans and tourists to visit most of the shopping malls and heritage sites in JB city, as well as Iskandar pilot zone area including Puteri Harbour and Legoland Malaysia. When the border is open, it will further benefit Singaporeans too – which they can enjoy 1-day family leisure and shopping trip from Legoland to R&F Mall as well as JB central.

The three routes have been confirmed as below:

What makes the experience even more enjoyable? Passengers get to receive R&F Mall shopping vouchers! More details on the mechanism to be announced later.

“R&F Development is happy and we welcome the launch of these three routes,” said Richard Hu, Chairman of R&F Group Malaysia, “We believe this partnership with Causeway Link will not only benefit the locals but also help in boosting the tourism industry in Johor, be it to domestic tourists or internationals.”

“We are excited to introduce these new routes to our commuters. Now Johoreans can add mall-hopping to their list of activities as Causeway Link buses cover most of the shopping complexes in JB centre,” said Ms. Fang, Deputy Executive Director of Handal Indah Group of Companies

With the introduction of the new routes, passengers can be connected to various places in Johor Bahru such as JB central, Legoland Malaysia Resort, Puteri Harbour, and different shopping malls, with affordable price from RM1 (JB Sentral – R&F Mall) to RM4.50 (R&F Mall – Legoland Malaysia).

Mr. Hu added, “Since our arrival at Johor Bahru six years ago, R&F Princess Cove has been dedicating in making this CBD area a more comfortable, and premium living area that full of lifestyle and convenient facilities. We continuously work with local authorities and education institutions to promote business, collaborations, and even arts and cultures.”

Aside from the newly added bus routes, R&F Princess Cove had also built a direct link bridge connecting the R&F Mall and the Johor Bahru Customs, Immigration, and Quarantine Complex (CIQ) making the walking distance in only 8 mins to reach the checkpoint to Singapore, all via the fully sheltered & guarded link bridge. The bridge has also won a Special Recognition for Public Facility during the 6th Annual PropertyGuru Asia Property Awards (Malaysia) in 2019.

The R&F Group is well-known in bringing in new developments to the state, the first international Opera House - Permaisuri Zarith Sofiah Opera House was also launched by R&F not long ago in January 2020, personally officiated by His Majesty The Sultan of Johor and Her Majesty The Permaisuri of Johor.

About R&F Mall
R&F Mall is the first shopping mall launched at the R&F Princess Cove, Malaysia. It comprises a variety of brands and services that cater to both millennials as well as families with children. It houses many ‘first-in-Johor Bahru” brands including the 1st Jaya Grocer in the heart of JB, the 1st PlayLrn in Malaysia - a new concept of “Cofamily space” educational playland, the 1st Dookki Topokki Steamboat in Southern Malaysia, the 1st LiHO Tea in Malaysia, the 1st KyoChon Korean fried chicken in Southern Malaysia, the 1st new concept café Routine by Soon, as well as its anchor tenant - the 1st Emperor Cinemas in Southeast Asia – all the way from Hong Kong.

With its perfect combination of indoor and outdoor spaces, convenient accessibility, and the fully sheltered link bridge connecting the mall and CIQ, R&F Mall is set to transform the shopping experience of local Johoreans as well as international visitors.

R&F Mall is the winner of the Best Retail Development at the 6th Annual PropertyGuru Asia Property Awards (Malaysia) and its link bridge has also won a Special Recognition for Public Facility.

About Handal Indah
Handal Indah Sdn. Bhd. was established in the year 2003 breaking a 30-year monopoly on cross-border bus services previously operated only by Singapore-based companies. The company operating under the brand “Causeway Link: The Smiling Bus” is one of the largest public bus service providers in Johor Bahru. Over the years, Handal Indah has expanded to more than 10 major cities and towns in Peninsular Malaysia with over 640 buses fetching approximately 3 million passengers per month.

Handal Indah Sdn Bhd is the first operator to establish centralized services monitoring and real-time commuter support. In addition, the company also introduced its own electronic payments services, contactless ticketing, smart city solutions and mobile-based journey planning to leverage on technology to bring about convenience and peace of mind to all commuters.

About Permaisuri Zarith Sofiah Opera House
The Permaisuri Zarith Sofiah Opera House is the first international opera house in Johor, officiated by both His Majesty Sultan Ibrahim, Sultan of Johor, and Her Majesty The Permaisuri of Johor on 19th January 2020. Its mission is becoming an art & cultural hub that promotes artistic taste and achievements, as well as providing an exchange platform for local and international arts, cultural engagement, creative inspiration, as well as fulfilling the locals’ need for arts and creativity in the new era.

With its significant location and distinctive design, the Permaisuri Zarith Sofiah Opera House has become one of the most iconic masterpiece and landmark in Johor.

About R&F Princess Cove
Following the China’s One Belt - One Road initiative, R&F expanded its development internationally since 2013. The group identified the land next to Johor Bahru-Woodlands CIQ as the most prime location and built their iconic landmark – the R&F Princess Cove. As the location of R&F Guangzhou’s first overseas project, Johor Bahru holds a special meaning to the group. This first overseas pilot project - R&F Princess Cove features a 5-star hotel, A-class office building, marina garden corridor, commercial area, luxury club house, and international standard apartment. It will be the largest international marina complex in Johor Bahru and Singapore with its grand scale, most complete packages, and latest concept.

During its five-year overseas journey, R&F has continuously invested in development and manpower, upholding their utmost mission in building a more comfortable and premium living environment in Johor Bahru. With the immense support from Johor government and all parties, as well as the attention and expectation from all media friends, R&F Princess Cove is constantly evolving – they have handed over 3,500 units of premium residential apartments, completed the construction of R&F Mall Johor Bahru, launched the R&F Marina Place and the marina promenade to the public. They have also transformed the land into one of the most shining gems in Johor Bahru and Singapore.

On July 14, 2005, R&F made a successful debut listing on the Stock Exchange of Hong Kong and subsequently became the first China property developer to be included as a constituent member of the Hang Seng China Properties Index.

As a testament to the group’s commitment and solid foundation, they have been recognized for numerous accolades including being ranked as the number 1 property developer in China for five consecutive years, from 2005 until 2009.

R&F also topped the list of “China Top 100 Tax Payers” in 2008, and have since expanded its business internationally to Malaysia, Australia, Korea, the United Kingdom, and more.